Visually explore package and module dependencies in an Elm project to help architect your app.

After completing the “Phoenix and Elm, a real use case” tutorial by Ricardo García Vega, I went back and refactored parts of the codebase in order to help me really understand it, and get everything straight in my head (I wrote about this in Migrating a Phoenix and Elm app from REST to GraphQL, and you can see the results in my repository versus the original).

Architecting in the Dark

I could not seem to find any generally-accepted ways to architect Elm code in the same way as I would architect Elixir/Phoenix or Ruby/Rails code, so I just let my instincts guide the code architecture direction, which currently lean towards small(er) modules and functions.

So, I thought it would be a good idea to break out code from big Elm files into individual smaller files located under conceptual concerns directories. For example, I extracted application code that looked like it was mostly concerned with a Contact out into a structure like this:

Messages to update a Contact would be wrapped in a top level Msg type called ContactMsg, and when that came through the main update function, handling of the update would be immediately delegated out to Contact.Update.

The nested message inside a ContactMsg, is completely opaque to Update, and it was only Contact.Update that knew what should happen when, in this case, a FetchContact message is received:

This sort of thing seemed like a good pattern to me in the absence of any others, but there was no way I could really tell if it was actually any good, or if there would be any issues, performance or otherwise, related to coding Elm in this way.

Until, that is, I was introduced to elm-module-graph, which enables you to visually explore package and module dependencies in an Elm project. It helped me understand that:

Here is how I generated the needed module-graph.json for the Address Book app (adapt the commands as necessary for your own project, and make sure you have Python installed):

Next, navigate to https://justinmimbs.github.io/elm-module-graph/ and upload the generated module-graph.json file, and you will see something like this: 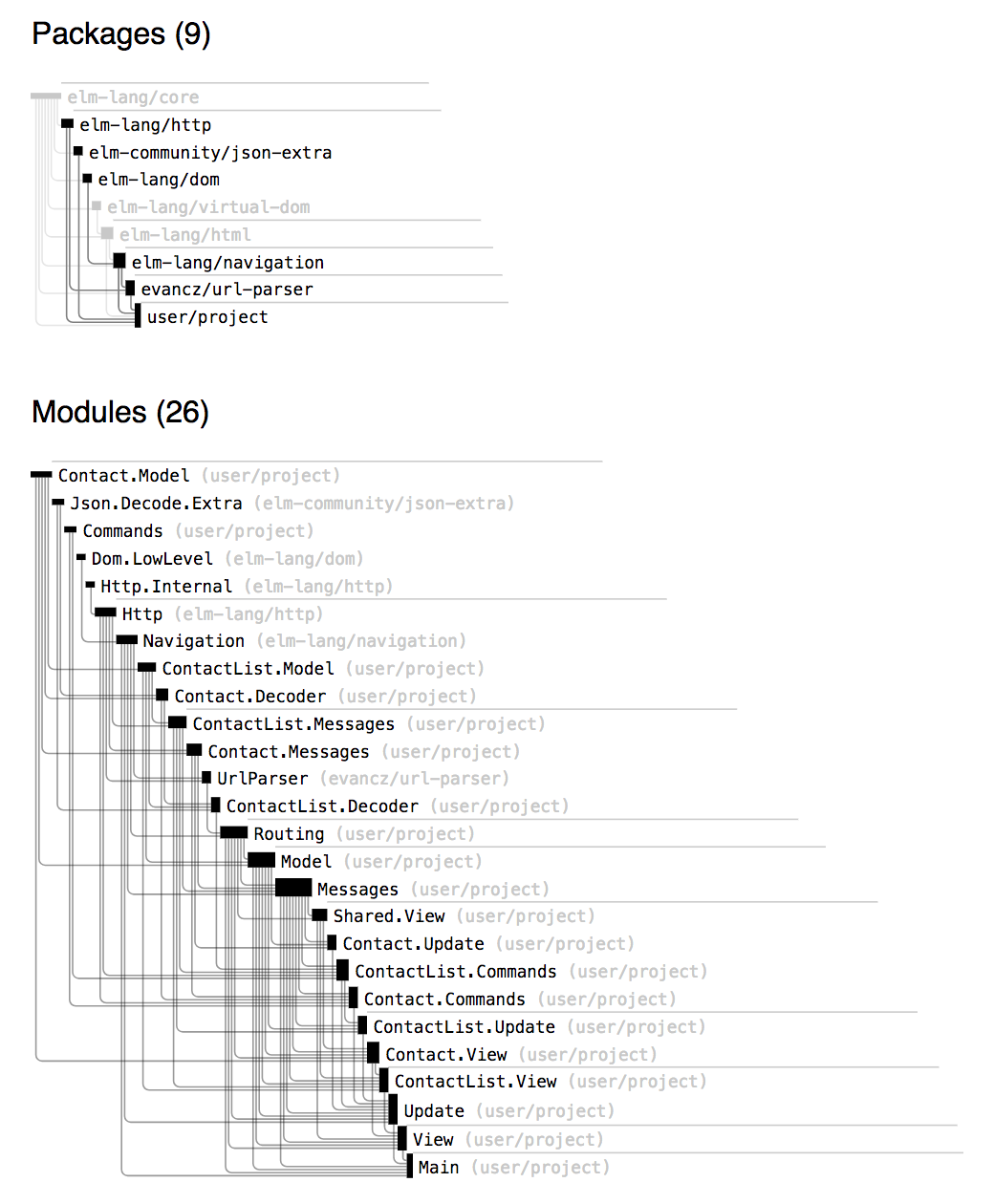 The default graph display includes modules from external libraries, so let’s hide them (by toggling the display of the external packages at the top) so that we can focus on the application code: 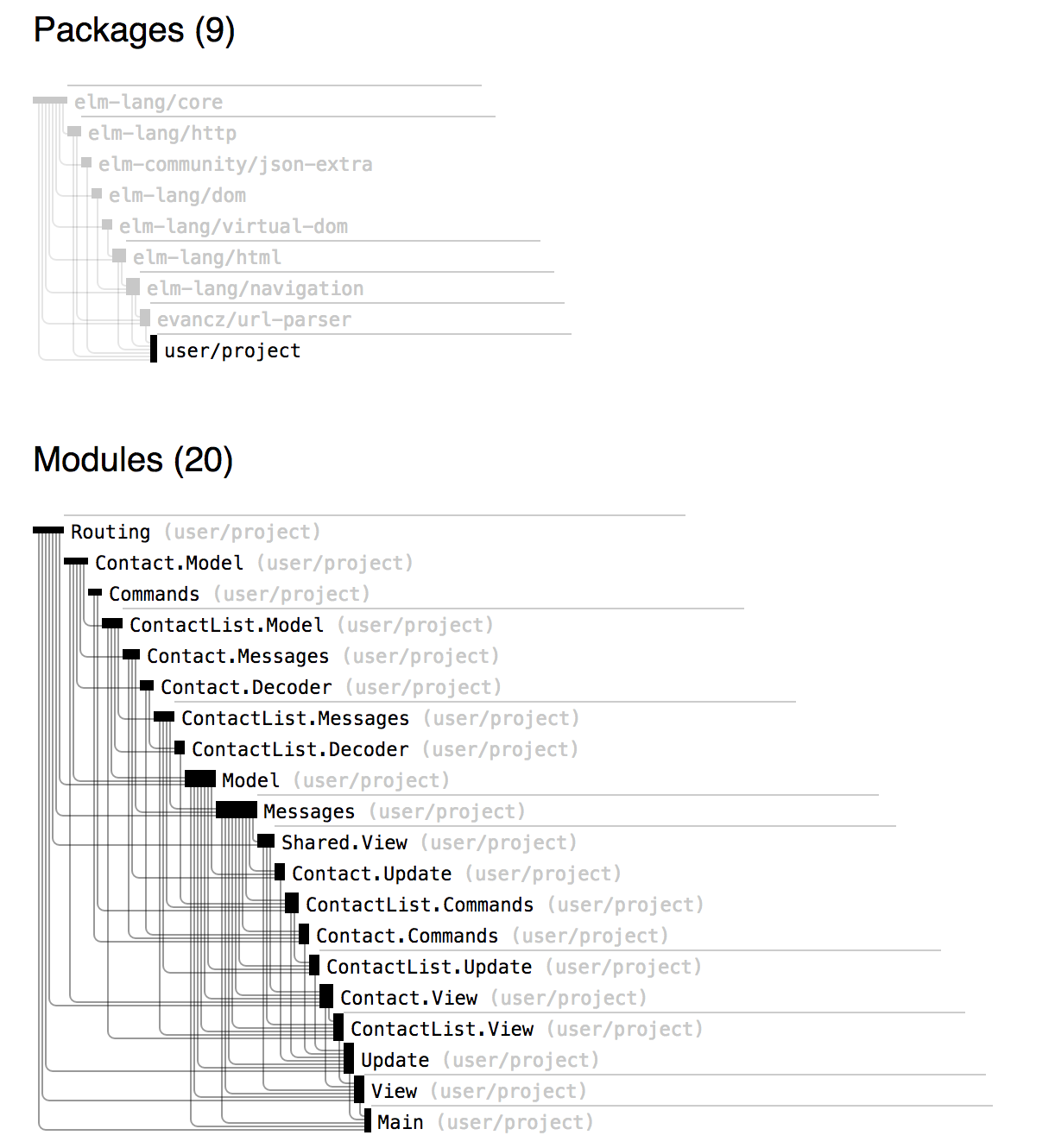 If a module has a long bar with attached lines in the graph, that means that it is imported by many modules. Here, it is clear that the Messages module, displayed right in the middle of the graph, has the longest bar, so let’s take a clearer look at its dependencies by clicking on it: 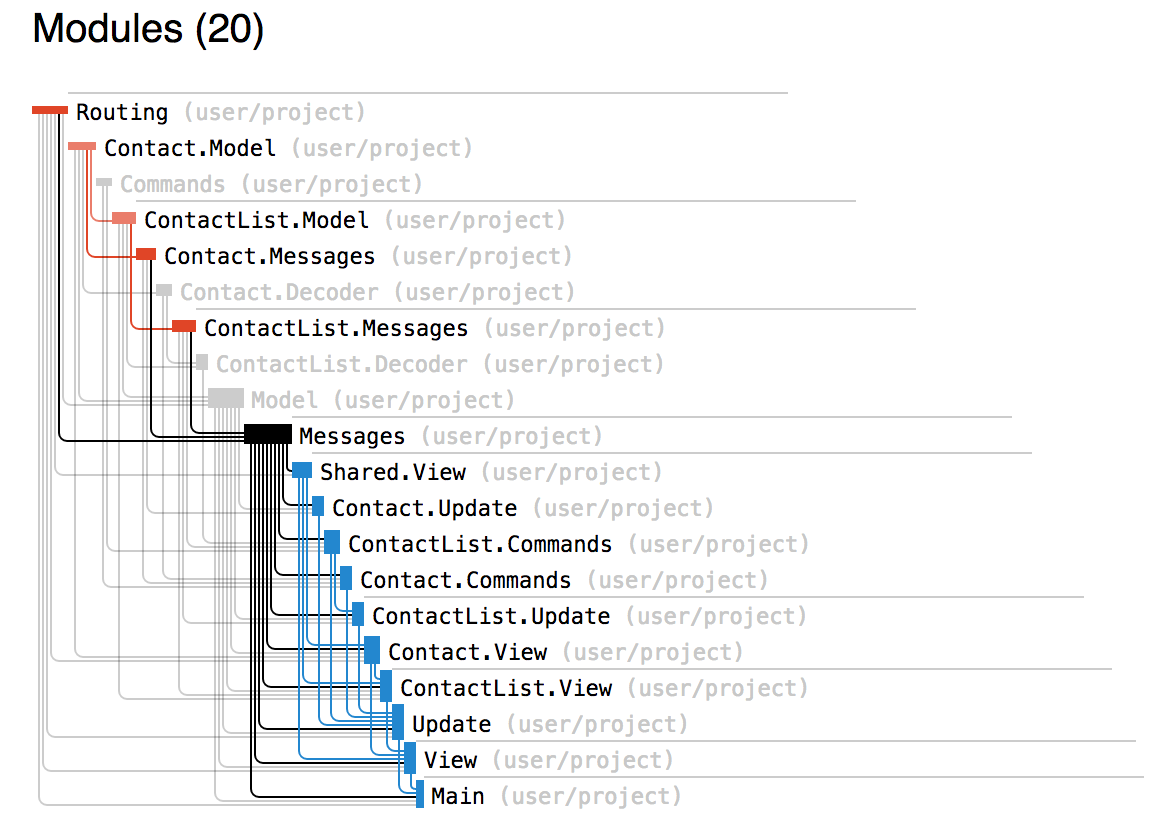 We have some leaking of encapsulation within the concerns, so, let’s see what can be done to fix them, with the initial goal of not having any modules under the Contact concern import the Messages module. The starting point for this refactor will be the rest branch of the Address App, so if you’re following along at home, clone the repo and let’s get refactoring!

If you get stuck while refactoring at any step of the way, have a look at the rest-refactor branch of the Address App for guidance.

Extract RemoteData into its own Module

Currently, the RemoteData type is contained in the top-level Model module. Since Contact concern modules needs to know about RemoteData, but not Model (they should only need to know about Contact.Model), let’s remove RemoteData out from Model and into its own top level module:

The Elm compiler should let you know the modules in which you need to change RemoteData references to this new one, but most of the edits will consist of changing references like:

In Contact.View, there is the following line:

NavigateTo is a message that is sent in onClick link attributes in HTML inside multiple view files. When this message is handled in Update, it only runs a command to navigate to a new URL, and does not return a new model:

So, in order to de-couple Contact.View from Messages, it looks like a new extraction of a Routing concern will be in order, so let’s start with defining messages and update handling for Routing:

We will also need to allow for a RoutingMsg to be handled by the top-level Messages module, so let’s add that (while removing NavigateTo from Messages), and fix Update so it can handle these new RoutingMsg messages:

Once this is done, we will start focusing on Contact-related modules. You will find that a number of different view files have been affected by the creation of the RoutingMsg, so some references and type signatures will need to change.

The Elm compiler should let you know about which modules need to have their NavigateTo references changed, but most of the edits will consist of changing references like:

or (depending on the file):

as well as changing function declarations to return a RoutingMsg, rather than a Msg:

Again, the Elm compiler will guide you on where the references need to be changed.

Next, there will be some messages across multiple concerns that will need to be Html.mapped into RoutingMsg messages:

One final minor view-related change is in the signature for Shared.View.warningMessage:

The change is ever-so-subtle: Html Msg to Html msg. This function is used in both Contact and ContactList views, and the message wrapped inside the Html could be a ContactMsg or a Msg type. Since the type of message is not consequential for the rendering of the warning message, we make the type signature ambivalent to the type of message provided and then returned back.

And that should take care of View-related code, so on to Contact.Update!

Currently, in Update, we’re passing the whole Model off to Contact.Update when we receive a ContactMsg, and Contact.Update.update returns back a (Model, Cmd Msg).

Now that Contact.Update.update doesn’t receive a Model any more, let’s change it so that it returns the (Contact, Cmd ContactMsg) that Update now wants:

Currently, the Contact.Commands.fetchContact function returns a top-level Cmd Msg type. What we want to do is have it instead return a Cmd ContactMsg, and have the caller of the function (in this case Update.urlUpdate) be responsible for Cmd.mapping the ContactMsg to a Msg.

So, this is what we currently have:

And this is what we need to change the files to:

Phew! We’ve made quite a lot of changes across multiple files, so let’s see if it paid off!

Having compilation problems? Compare what you’ve written with code in the rest-refactor branch of the Address App and see if they match up. 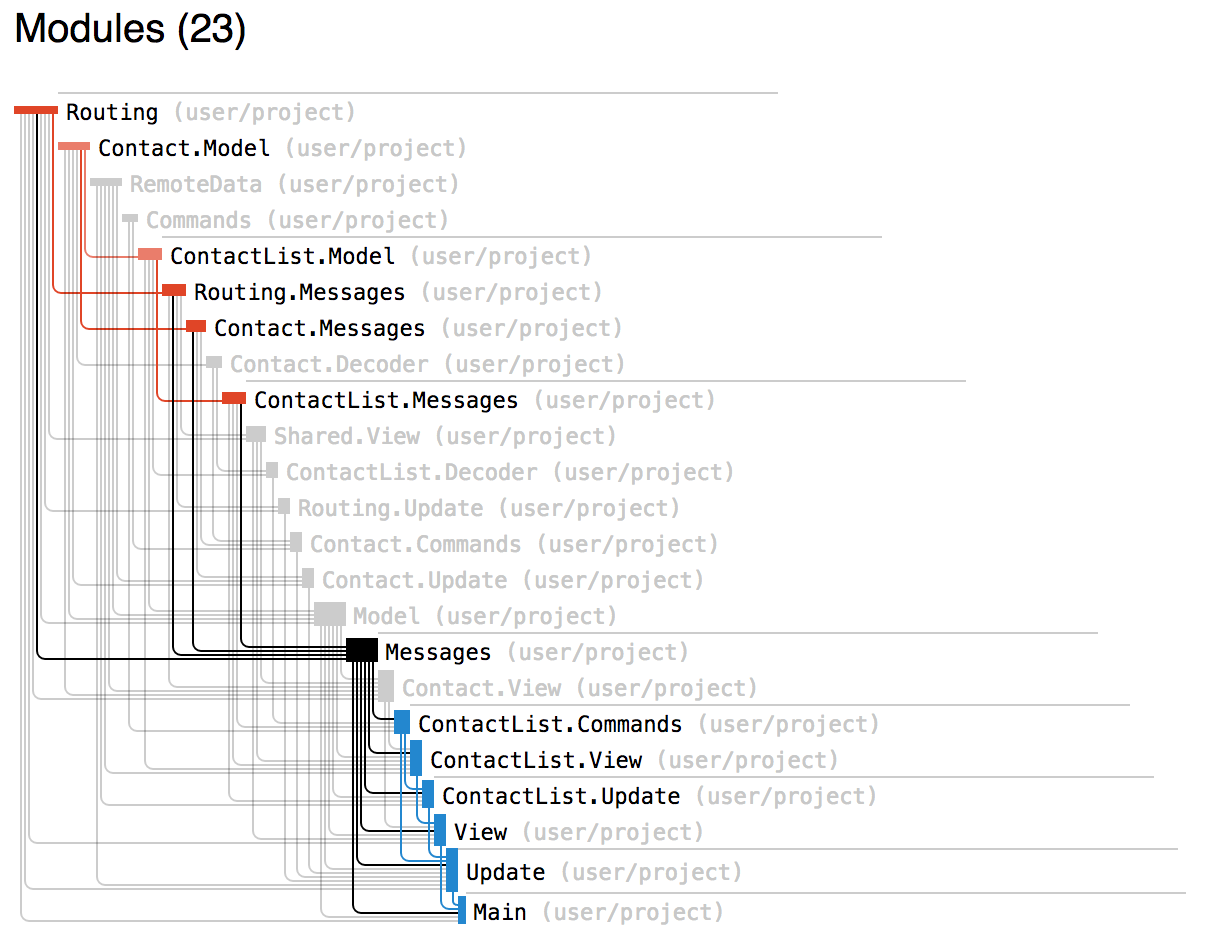 Awesome! Modules in the Contact concern now have no direct dependencies with the top level Messages module!

I have attempted to take this even further by removing ContactList dependencies in the Messages module, and you can see the results of that in the rest-refactor branch of the Address App if you are interested. Suffice to say, the graph now looks like: 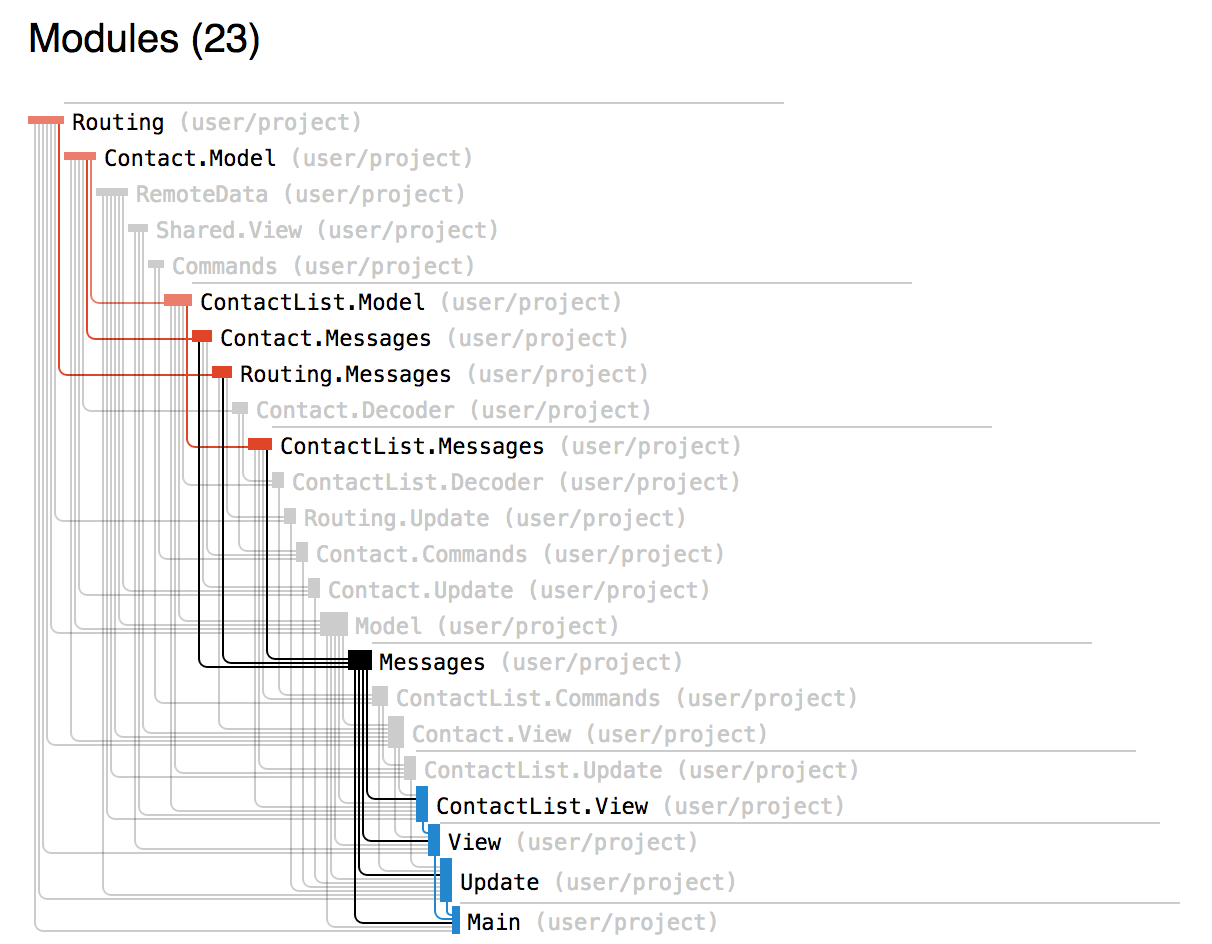 Not bad! With further refactoring and re-architecting, maybe I could remove ContactList.View from this list, but I’m done fighting with types for now

I found that using elm-module-graph was helpful in getting a high level overview of my Elm application, determining where potential compilation bottlenecks could appear, and deciding how to structure modules.

Is the way I architected and then refactored the application presented here a “good” way to do it? At this stage, I do not know. I am very happy to be shown to be wrong about this, but for now, this way of doing things (less massive files; more smaller functions in smaller modules under concern directories) feels right to me, especially since I do not know of any “official” guidance on this.

Regardless, on your next Elm project, give generating a graph for it a try for some easy-to-digest information about its dependencies!

You may also enjoy

A short story of overwork from the software trenches of Tokyo.